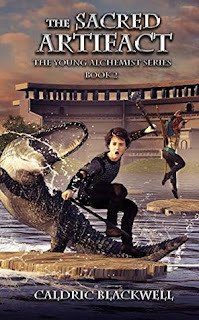 Caldric Blackwell’s The Sacred Artifact, the second book in the middle grade fantasy Young Alchemist series, follows fourteen-year-old alchemy student Craig Pike and his teacher, Cornelius, on a journey to uncover the secrets of a mysterious artifact.

Readers of this middle grade book follow along as Craig and Cornelius, with the help of witty archer Audrey Clife,  trek across dangerous lands, compete in a cutthroat tournament, and reunite with old friends. Eventually, they arrive at the very place where alchemy started, hoping a wise, ancient alchemist named Quintus can shed light on the mysteries of the artifact.

The artifact proves to be more powerful than anticipated, and they soon discover it had a role in the origins of alchemy itself. But they aren’t the only ones seeking to uncover the artifact’s secrets. Readers of this middle grade fantasy novel are faced with the question: Can Craig, Audrey, and Cornelius unravel the mystery of the artifact before it falls into the wrong hands? It’s a race against time with the fate of alchemy in jeopardy.

As a middle grade fantasy novel with a target audience of ages 10 to 14, Caldric Blackwell’s The Sacred Artifact is perfect for young readers looking for a middle grade book with a whimsical, action-packed story filled with mystery, fantasy, and friendship.

Buy the paperback on Amazon

Buy the Kindle version on Amazon

Reviews of The Sacred Artifact, a middle grade fantasy novel

‘[The Sacred Artifact] has an old-charm feel, reminiscent of the Percy Jackson series, and the classics of C.S. Lewis. Readers are transported through time and space to a world filled with alchemy, fantasy, numerous dangers, and characters you can root for and feel a real connection with.’ – Editor Charlene.

‘The Sacred Artifact is a middle grade novel that tweens and young teens who are fans of fantasy and adventure will devour.’ – Parakeet Reviews.

‘If you enjoy middle grade fantasy books, then I recommend you check out this series.’ – I Heart Reading.